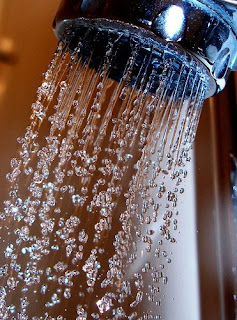 taking a shower like the olden time samsui female, via the hand bucket, ain't exactly my idea of fun. unfortunately, little can be done when the shower faucet decided to quit and fall apart a few days back. without much of a choice, or any choice for the matter, had to fall back on taking a shower the old fashioned way, just that was not wrapped up in a sarong and standing by the well or riverside.
the regular shower was not too bad. it was the hair washing that drove me absolutely nuts. doing it by the hand bucket method certainly takes quite some skill, am just thanking god the hot water did not die on me at the same time.
am totally relieved that the problem has been fixed, probably to the point that might have kissed the bathroom floor in all gladness, almost that is. well, got to say that it was quite an experience for all the inconvenience, though the bigger lesson learnt was to never take modern technology and its usefulness for granted, especially since the dependence on it is enough to cripple one to tears with the frustration caused. if anything, guess the only good that can come out of this incident, is that saved a little on the water bill this month.
Posted by the chubby dodo at Thursday, July 09, 2009

glad you were well enough to go out.