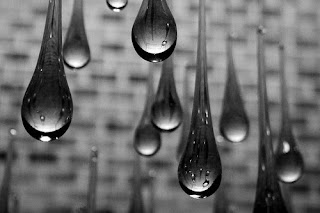 as the dimming lights shrank sprightly small...
made it to the final curtain call...

and after the tight reined hold of all within...

exhaustion beyond that could make any proud figure crawl...

the inevitable fall...
Posted by the chubby dodo at Monday, September 21, 2009 3 comments: 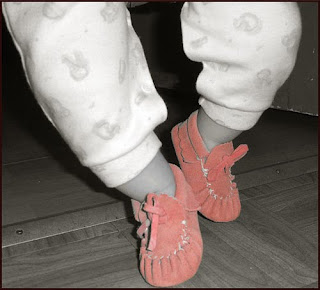 "let me win, but if i cannot win, let me be brave in the attempt."
that certainly ain't an easy feat to manage, that much is for sure. so special olympic and olympians, thank you, for this one very precious lesson that was taught in a time of long ago.
Posted by the chubby dodo at Sunday, September 20, 2009 No comments: 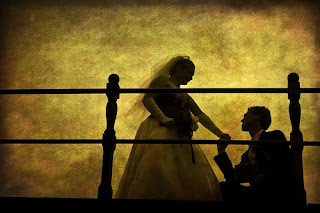 crazy busy schedule from rehearsals and all almost tore me away from attending a close girlfriend's wedding whom had promised to go for ages ago. the small affair was nothing short of beautiful, and really could not be happier for the couple given that they were really the epitome of perfect imperfection, intertwined to breathe a whole new definition into what it means to have lives meant to be melded together.

best part would probably be the fact that there is actually a part two to it, very much like a sequel indeed, and god knows what that would be like when it happens. until then, bet it does not get any whackier than the uber cool wedding entrance with the whole entourage dancing down the aisle. makes me think back on my own crazy impulsive moments where there was this temptation to yell out "happy new year" in the church when the clock struck the auspicious hour of midnight where the new year was being ushered in with the church bells striking its twelve rings in slow sureness, with the entire congregation in golden silence, the atmosphere in an unbelievable ethereal peace.

well, in my defence, this little one was eight then and thought that would be pretty cool since it has never been done before, though that would probably have shamed my parents into wanting to go into hiding in the himalayas for the rest of their living days. that was never done, though there has been many a time where the "what if..." was pondered about. after all, insane antics like these are certainly once in a lifetime, irreplaceable, and very much unforgettable.

Posted by the chubby dodo at Wednesday, September 09, 2009 No comments: 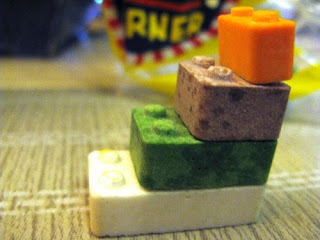 an ominous feeling, that weird sense of knowing, of when the end would be.
a sight foreseen, far beyond human comprehension, where the build up of what is, would somehow become, what would eventually land up as, with each step an impending move towards calamity.

what then and where after that one ineludible capitulation???
Posted by the chubby dodo at Saturday, September 05, 2009 1 comment:

many a day, there is this one thought that creeps up in all its silence, after lying in complete stillness, dormant, patiently waiting, waiting for an opportunity to pounce that random surprise that would throw me totally off balance. many a time, it never fails to do so. no reason why.

nevertheless, a fortuitous tidbit like this would somehow conveniently pop on by, inadvertently reminding me of that one lesson often carelessly forgotten. and somehow, somewhere, along the way, another is conveniently stringed along. times like these make me question if there really is such a thing known as an arbitary incident, or if such instances actually play into a "chance happening" where it is, in all actuality, just another micropiece of a gigantuan puzzle.

we are not really all that different, neither are we all that similar. if so, what are we really then??? or rather, think the bigger, as well as more prelevant, question is actually about the "who", and not so much the "what".

somehow, for some strange reason, the old man spoke to me, in that tiny instant, when he told the girl to close her eyes. it brought me back to that one moment in time, where it was once possible to actually play a piano piece, and an examination piece at that, with my eyes shut. remembered my piano teacher telling me to just let my fingers glide over the black and white keys, as it instinctively would, and just, well, go by feel. in my mind, it was deemed mission impossible. however, apparently, it was not quite so. not only was the piece played blindly, it was, miraculously, executed flawlessly. a high distinction was scored for that particular piano practical examination. it was the very first, and sadly, also the very last. that said, this one off, is probably better off far buried beneathe the sands of time, coming under the category of "an accident" that belongs in a time, of too long ago. 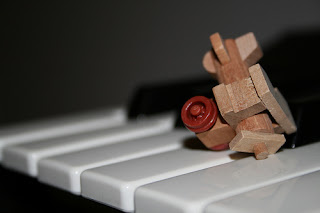 crash landing into a deck of black and white...
a catalysmic soul shattering obscured in frightfully chaotic sight...

nothing more than life's sacrilegious concetto and contemptuous slight...
Posted by the chubby dodo at Wednesday, September 02, 2009 No comments: 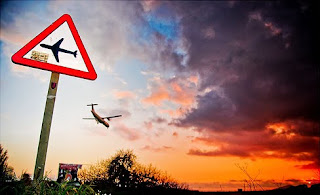 touch downs used to have, albeit only very little, a sense of welcome, no matter where they were. do not get me wrong, for really am a fond lover of the beautiful blue skies, just that, there is something this inexplicable feeling about touch downs. pity it ain't enough for me to want to kiss the ground, no as yet that is.
mayhap it is to do with that know of coming to a snug hug to make the hateful tears and fears go away, even if for that teeny bit. mayhap it is to do with that know of a fond catch up on all that has been missed in the midst of neverending spontaneous changes. mayhap it is to do with that know of a life beyond.
the plane still lands without much of a hitch. the walk through those gates are as they were, yet, something in the air, something about the touch down, is, just, somehow, no longer. such is the extent of the disconnection.
Posted by the chubby dodo at Tuesday, September 01, 2009 No comments: