knights of the round table... 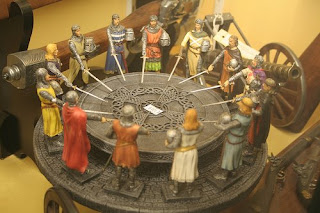 brotherhood is somewhat, yet not quite somewhat, a term loosely flagged about with the species that probably like to holler "hooga chuga hooga yaga" or "oorrrh yee oorrrh yee oorrrh" and travel through the tree route by vine express. one minute, brotherhood is about that boy's night out, maybe enjoying their favourite basketball, baseball or soccer game on the tube, throwing peanut shells around, chugging beer down like water and no tomorrow, and that whole ritual of burping, farting, scratching where the sun does not shine. before your know it, it runs, no, swings in a totally different direction, a hundred and eighty degrees in the opposite direction.
so in the next minute, brotherhood becomes all about brothers getting together and drinking like a bottomless pit, no, make that a bottomless pool when you combine all them pits, when there is one in the hood who gets shot at. three main failure possibilities, namely love, money, work, in no particular order, though the probabiliy percentage is in descending order. in any case, it could be a combination of all three, or sadly just one, but totally burnt one way or another.
so the whole night through, the cups are magically full and overflowing, makes one wonder where all that gold comes from. brotherhood has morphed into an affair about drinking and accompanying, whilst getting the poor thing totally inebriated so that he gets to, or pathetically attempts to, forget his sorrowful despondence. not quite a pretty picture of knights of the round table, but guess there has to be some sort of credit given for the underlying principle, somewhat.
someone close once told me, "brotherhood is a load of bullshit", it is just a convenient excuse and clever cover for the male inane need to prove their masculinity. and no, he was no she. it was hard not to disagree with that statement, even if it might have sounded like a sweeping one. however, that someone had a point, for there has to be, is in fact, more to brotherhood than just the burp, fart and scratch and comparing whose black book had more numbers, or belt that had more notches.
when it boils down to the fundamentals, brotherhood is no different than from a girl's acclaimed sisterhood. it is really all about the knight's code, that of loyalty. some to whom it can be undying, others in slighter degrees.
seriously, at the end of the day, will you pledge your allegience to the "what"??? or will you pledge it to the "who"??? what would you do when the tide turns and runs rough???
hear ye, hear ye, knights of the round table; unite. this day, it shall be, be it brother or sister, "one for all, all for one". aye???
Posted by the chubby dodo at Monday, November 17, 2008